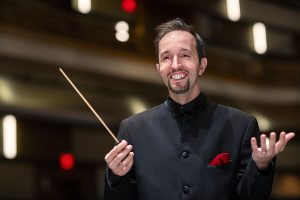 Emerging American conductor Christopher James Lees brings passionate and nuanced orchestral performances to the stage, a fierce commitment to contemporary music, and a natural charisma to audiences all around the world.

In 2018, Mr. Lees began an appointment as Resident Conductor of the Charlotte Symphony Orchestra and Principal Conductor of the Charlotte Symphony Youth Orchestra. In addition to the more than 50 annual concert appearances with the CSO, he has stepped in to conduct Subscription Classical performances on four occasions, including a gala weekend with Grammy Award winning artist and Jazz legend Branford Marsalis in May 2021.

An active guest conductor, Mr. Lees has returned for performances with the Los Angeles and Rochester Philharmonics, the Houston, Detroit, Milwaukee, North Carolina, Portland, and Flint Symphonies, and conducted debuts with the Indianapolis, Kansas City, Toledo, and Vermont Symphonies.

Only the second American Gustavo Dudamel Conducting Fellow with the Los Angeles Philharmonic, Mr. Lees made his debut with the orchestra in April 2013 and returned for concerts in February 2015.

A recipient of a Career Assistance Grant from the Solti Foundation US, Mr. Lees was also chosen for showcase on the Bruno Walter Memorial Foundation National Conductor Preview, hosted by the League of American Orchestras and Louisiana Philharmonic Orchestra.

An equally passionate advocate for music education, Mr. Lees has brought inspirational energy to student orchestras across the country, from the Colburn School to the New England Conservatory, and previously served on the faculties of the University of Michigan and the University of North Carolina School of the Arts.

A native of Washington, D.C., Mr. Lees holds bachelors and master’s degrees from the University of Michigan, and has studied conducting with Larry Rachleff and Robert Spano, as well as having participated in masterclasses with Lorin Maazel, Michael Tilson Thomas, Gustav Meier, and Jorma Panula.

When not performing, Mr. Lees can be found building Lego sets with his six year old son, reading the stack of books by his nightstand, or training outdoors for his next 10K road race.